A few weeks ago I posted about how Caleb was no longer a fan of having his diaper changed and lying on his back. It was no fun for him. It was no fun at all for us. And for a few days, I was thinking “THIS IS HOW IT’S ALWAYS GOING TO BE! SAVE ME!” Eventually, we found a technique that worked to change the diaper, but left him turning purple in the face screaming he hated it so much: 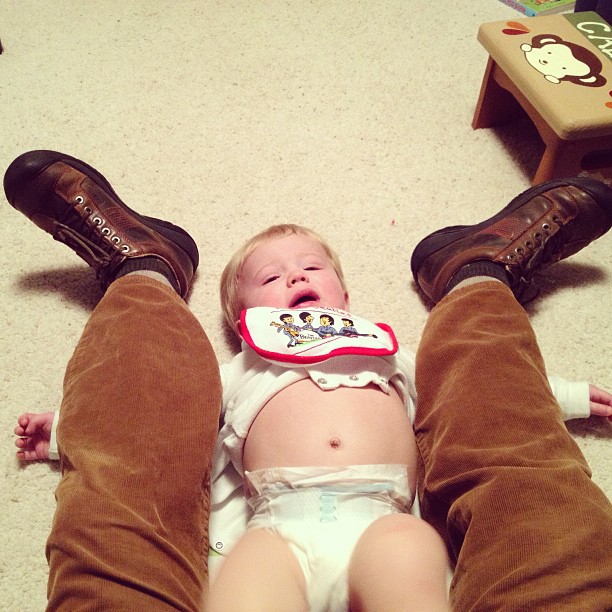 We really needed to find some other solution. Enter Hulabye. I initially found it while searching on YouTube, and thought it was worth giving a try.

And it’s been awesome.

Now, let me state the obvious…in some ways, it’s kind of like a baby straight-jacket (though he can move his arms, so it’s not that bad). We’ve been using it for a few days now, and while he’s not a huge fan of it (yet), his face doesn’t turn people, it’s not a battle to change every diaper, and we’re all left in somewhat better spirits after the end of a diaper change. This video clip was the first time I tried him in it. Again, he doesn’t look like he totally loves it…but he’s not flipping over, I’m not losing my mind, poop isn’t flying everywhere and again….he’s not turning purple in the face from screaming!

Hulabye has all sorts of styles and colors, and so you can certainly find one that you like. If you’re having a similar problem as we were, I would highly suggest this as an option that will really relieve stress for both you and your baby. Here’s a video of how the Hulabye works:

The folks at Hulabye were gracious enough to hook me up with a Hulabye to try out with Caleb – it’s been great!