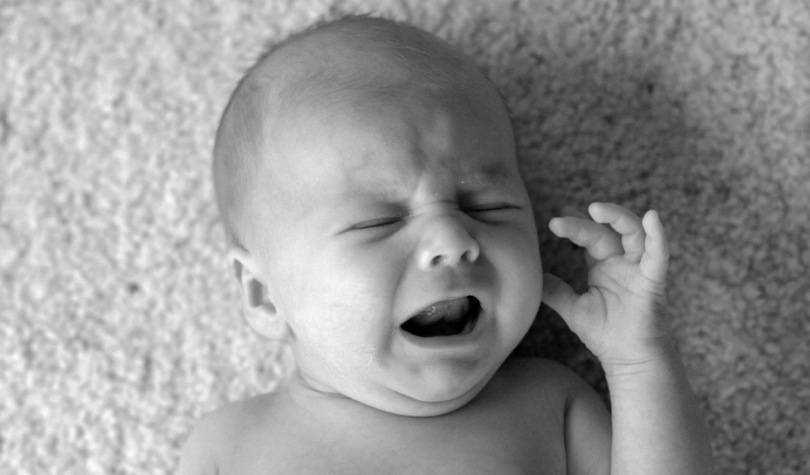 We let Caleb cry for 12 minutes last night. And at some points, he was really losing it. At other points, it was more of a whimper…but we let him cry.

If you asked us seven and a half months ago if we would let Caleb “cry it out” – we would have said no. There was that article getting linked all over Facebook, at around that time, about how they found that babies who cried it out, actually lost some brain cells, or something like that. And all of the attachment-parenting folks let up a communal “BOO-YAH!!!!”, for they knew they had been doing it right all along.

But…parenting is hard. And getting babies to sleep is hard. Caleb, of course – like all babies, has gone through cycles. There were some weeks where he’d sleep through the night. Other weeks, where he’d wake up occasionally, and we’d give him a bottle to go back to sleep…we tried different things, but most recently, it was taking a bottle (or two) to get him to go to sleep in our arms…and then of course came the…transfer…from our arms to the crib. And if you didn’t do it just right, you’d have to start the process all over again…to say that it took a long time or was trying on one’s patience is an understatement.

And then there were the naps…or, the non-naps…or the attempts at naps, which would sometimes last 30 min. There aren’t many things more frustrating than working for 30-45 minutes to get your baby to go down for a nap, only to have them sleep for only about 30 minutes. Sarah is at home with Caleb for the majority of the time all week, and it’s incredibly trying and tiring for her to deal with a baby that doesn’t nap.

About 2 weeks ago, we moved back to the swing for naps…and we occasionally had luck with that, and our babysitters generally had better luck with them. But he is going to hit the weight limit for the week any day now, and we knew that we were using that as a bit of a crutch.

So, before we left for vacation, I moved the swing out into the garage, and Sarah started reading “Solve Your Child’s Sleep Problems” by Richard Ferber. Two nights ago, after leaving the hotel in Atlanta and arriving at the condo in Hilton Head, we decided to start using Ferber’s method for naps & bedtime. So she got him ready for his morning nap, put him in the crib awake, and just walked out of the room.

We couldn’t believe it. So we tried it again in the afternoon. Same times in between going back in to comfort him…and he slept for 1.5 hours. We tried it again at bedtime. I got him ready, read him “Goodnight Moon,” gave him a bottle, and then put him in the crib awake. I had to go in twice (like earlier in the day) to comfort him, and his crying did get pretty loud. But after about 12 minutes, it stopped. Just like that.

I went in to check on him and he was asleep. Dead asleep. And he slept from about 8pm until 7:30am.

We’ve had equal amounts of success today with his naps, and we just put him down about 45 minutes ago for bedtime. He cried for about 3 minutes and then stopped. And now he’s asleep.

Now – we might chalk this up to beginner’s luck, or it could be that he’s just screwing with us…or it might be that at about 7.5 months old, he was ready for this sleeping technique.

I’m probably not going to become a die-hard “crying it out” advocate, and I certainly won’t tell anyone else what to do, but for us and Caleb, for this stage of his development, for the sanity of his mom and dad, for allowing him to get the sleep that he needs at this age, and for making everyone’s lives a little bit easier…this is working for us right now.

And I have to say – it’s pretty amazing to hear him crying for a few minutes, and then to just stop. To put himself to sleep. And to know that he wakes up happy, excited to see us, and doesn’t seem to be too worse for the wear.

Now I’ll admit, there is a part of me that feels kind of bad coming into the room with a screaming baby, looking down at him, patting him, comforting him, and then saying “I love you buddy” and walking out while his screaming continues. But…at least in the past 2 days of trying the crying it out method…his crying really doesn’t last long, and he quiets down, goes to sleep, and enjoys long and regular naps, and a great sleep at night.

I think part of parenting is doing the things you wouldn’t think you’d do. Or the things you swore you’d never do. And I don’t think that’s a bad thing. I think that crying it out makes sense for some people. And I think attachment parenting makes sense for others. And both can work for some people at different times in their lives and their baby’s life.

We also started putting Caleb directly in front of the TV at points today to get him to chill out…and he is mesmerized. Now – that’s for another post – but it just goes to show that you never know what you’ll do sometimes as a parent. Would Sarah and I have said that we were going to let Caleb cry it out, or that we’d be putting him in front of the television to give ourselves some peace and additional sanity? Probably not.

But it’s working for us now. And I think it will help us enjoy our time with him even more, and allow us to be better parents in some ways.

What things have you done, or are you doing, with your children, that you swore you’d never do? How do you feel about that? Is it working for you?

Update #1: We’ve continued to use this method the past few nights and it’s working well. The naps are going okay (except for the 24 minute nap he just took….fail), but he’s been sleeping really well at night and last night, he woke up a couple times but put himself back to sleep. And reading more about the method in Ferber’s book, it’s actually called the “Progressive Waiting Method” – and not the crying it out method.

Update #2: After posting a link to this blog post on Facebook, I was promptly unfriended by someone who I’ve known for years. She said that what we were doing was tantamount to child abuse, and she didn’t want any part of it. I can respect people’s different ideas and beliefs – but that just seemed a little harsh…