I never imagined I would be so picky about wipes. I doubt Sarah did either. But I am. I’m incredibly picky about wipes. I don’t remember the brand of the ones we used at the hospital when Caleb was first born…but I liked those. Eventually we switched to Seventh Generation wipes. They were great. You could pull one out, and it would bring up the wipe under it for easy dispensing of the wipes. I hope I’m describing that accurately, because that’s the biggest point for me when it comes to wipes. 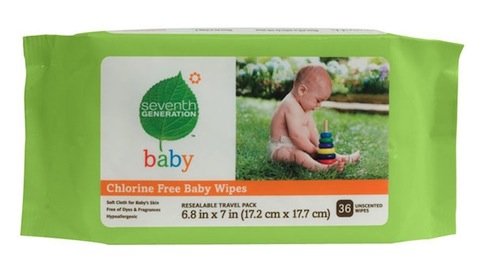 When do I use wipes? Not when I’m just casually hanging out with Caleb, and I can let go of him, stick both fingers into a bag of wipes, and try to pull out one wipe at a time…no. I’m using wipes when I’m changing my baby’s diaper. And sometimes it’s disgusting. Like, hideous. Really, really gross. Other times it’s no big deal – but when I’m changing a diaper, I want to be able to pull out a wipe, use it, reach over and have the next one ready for me to grab. Just like that. Basic. Simple. Right?

A few months ago, we started getting all of our baby stuff, and some household cleaning supplies, from Jessica Alba’s Honest Company (I blogged about the company, and their diapers specifically, here). We like a lot of their stuff. I really like the skull & crossbones diapers (though I don’t think my mother or my mother-in-law are particularly fond of them). But when I first got their wipes, I was ticked. 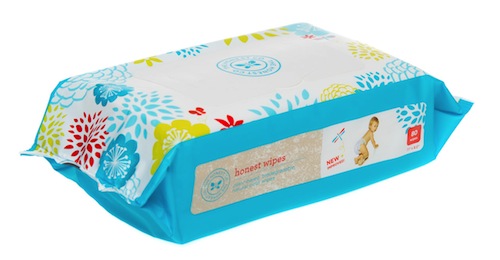 First of all, the quality just wasn’t that great, but that wasn’t the worst part for me. The way they are designed, they are just individual wipes, stacked one on top of another, with no part of the top wipe interlinking with any part of the wipe directly below it. So you take one out, and then you have to stick your finger in the packaging, and fish around for the second wipe. And they are not very easy to separate from each other. In any case, they’re a mess.

Or, they WERE a mess.

I called The Honest Company when I first found out how much I didn’t like their wipes, and when I mentioned something about the wipes, they said, “Oh…we know what you’re going to say – but go ahead.” They knew their wipes sucked. And they were going to completely revamp them in a few months. Good, I though. I’m not crazy. I’m not totally high-maintenance when it comes to wipes (Sarah would disagree) – there are other people out there like me, other normal people who just want wipes that are easily dispensed.

So I shipped all the wipes that I had been sent, back, and they were going to send me 9 packages of their newly-designed wipes.

In the meantime, Sarah picked up a package of Earth’s Best wipes. 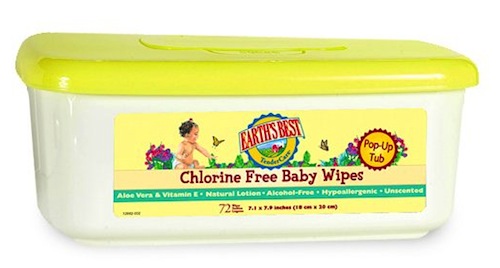 These were actually pretty large, good quality wipes. And guess what…? They weren’t just individual wipes sitting on top of each other, like the old Honest wipes. They were actually connected, which I initially thought was awesome.

And then I started using them. And then I found out that the company does too good a job of keeping them connected, and so when you pull one out, sometimes you actually get two or three stuck together, and it’s a pain (as I type this, perhaps I am a little bit high maintenance when it comes to wipes – but seriously people – I just want things as easy as possible when I’m changing a baby’s diaper). So, I held out high hopes for the newly designed Honest wipes.

And those wipes came today.

I could tell they were much thicker (which they had said was going to be part of the newly-designed wipes) – and I was excited as I opened the package, pulled out the first wipe, and…..then…..had to cussing stick my finger in to find where the wipe directly underneath the top wipe began, so I could pull it out.

No change, at all, with the dispensing problem.

So I thought maybe I just had a bad batch. So I tried another package of wipes.

And that’s my rant on baby wipes. Who knew I’d be able to write so much about baby wipes, but when you’re  particular like I am with wipes, apparently it can bring out a lot of emotions…

Anyone else have favorite baby wipes out there? Anyone else find themselves to be as particular as I am about wipes?