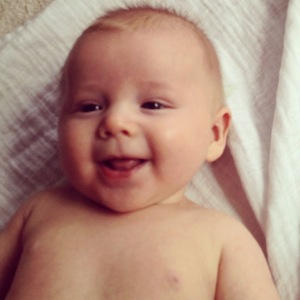 Last night he went down like normal, I got home, we went to bed and around 1:50am he woke up crying. I was a little pissed that he had woken up…but we went about our normal routine. I went to un-swaddle him, check his diaper (yup: poop), swaddle him back up and bring him into our bedroom so Sarah could nurse him. She did that and then we realized he’d need a bottle too. So I went to warm it up and brought it back. Sarah fed him some until he was sleeping.

Then I picked him up to put him in the crib and he started wriggling. That’s it. Just wriggling. Then a lot of wriggling. Writhing I think is a better term.

So I sat down to finish the bottle with him, and he would just keep whipping his head back and forth…totally not interested in the bottle. Yet when I pulled the bottle away, he’d start writhing again and start fussing. Now it’s about 2:45am and I’m pissed. All I want is to make him go back to sleep, and he seems to be getting more and more amped up.

And that’s when I pulled the bottle out, looked him straight in the eyes and said (in a forceful tone of voice): “Caleb! Stop it right now!”

Surprisingly, that had absolutely no effect on him.

Nothing quite like yelling at your 3.5 month old son (your freaking cute 3.5 month old son, see photo above) at 2:45am in the morning to make you feel AWESOME about yourself. Way to go, dad. Yell at your son for being a baby. Yell at your son, who is obviously feeling discomfort or frustration or…something(!), and is trying to communicate that in the only way that he knows how at this age.

Not a great moment. I had to go ask Sarah to tag-team and finish the “make-the-baby-fall-asleep” task because I could tell I wasn’t in a good mental space to be doing it right then.

I get that these moments happen. The frustration. The things that we do or say because we are more sleep deprived than we realize. But it still feels shitty. And while I don’t know all about the brain science or memory of a 3.5 month old, and I doubt that he will forever remember that 5 second interaction and need to talk about it in therapy some day…I still wish I could take it back. Mmmm, parenting. Good times.