For those of you who are visiting Dazed Dad from Simple Mom, welcome! It’s great to have you here. I hope you’ll take some time to look around and read about our journey. I am a father of 3, 1 living. Our twin boys, Micah and Judah, were born and passed away on October 25, 2010. You can read our story here and here. On December 30, 2011, we gave birth to Caleb Elijah (pictured below): our third son, a beautiful baby boy and a true gift. 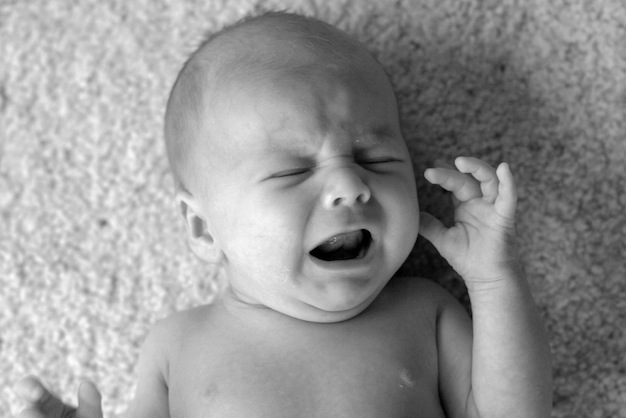 Not sure what this says about me that the first post I write here since his birth announcement is a statement about how I hard a hard time liking my son (at night), but…there it is.

Now, if I’m being fair, I don’t really like myself in the middle of the night, and I think Sarah probably finds me pretty annoying then too.

But this parenting stuff is hard. People keep saying that it gets better, it gets better, etc. But I’m with Artie, when he said in last week’s GLEE episode, that he doesn’t want it to get better later; he wants it to be better now. Right now.

And maybe we don’t get that. Maybe this is the rite of passage that we just have to go through as new parents. But for now, it can be pretty hard.

And I know that it will get worse at times too…I know from all those folks who are already parents who have told me about the teething, about the truly explosive BMs and the crying that goes on and on…and the babies who are truly colicky babies…I know it can be worse, and may be worse for us in the future too.

But again…it’s the present moment that I’m talking aout. It’s the nights like this past week when Caleb was apparently going through a growth spurt, and he was crying, and crying, and screaming, and fussy, and un-calm-able (at least by me it seemed at times). It’s those times when Sarah and I are playing tag-team (a bit unwillingly on my part, at times) to rock, burp, pat, bounce and try to calm this little baby who is so damn cute, like angelic-y cute, during the day – and then seems to turn into something else in the wee hours of the morning.

When I finally get up with him, walk around the house, and see that light is beginning to hit the hills around Ashland…then it’s like something magically changes, and it’s a lot easier to like him again. But man oh man…that little dude during the nights when he’s fussy, having digestive problems (I probably gave him my IBS), crying and then just starts screaming…I have a hard time looking at his little face and thinking to myself, “Hey little buddy…I really like you.”

Does this make me a bad parent? (Sorry Sarah – you’re not allowed to answer that question)