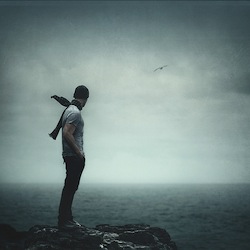 The time that we spent in the hospital 3 weeks ago seems like a blur. After we had received the news from the doctor that the pregnancy had to be ended, they started Sarah on the drugs that would induce labor. They also gave her something to help her sleep. We were in Walnut Creek, about 30-40 minutes from Livermore, and there were some things that we needed from home. And I had to move the car, so I decided to drive home to pick some stuff up. I was gone for probably just over an hour and a half.

I don’t remember much about that trip home. I have no idea what I was thinking or feeling as I made that drive home. I remember thinking that I should probably put the car on cruise control or I would probably get pulled over for speeding. So I jumped on 680 going south and plugged in my iPhone. I needed music, anything, to keep my mind off of what was about to happen. Just a few weeks earlier, I’d picked up Linkin Park’s new album, “A Thousand Suns.” I was strangely drawn to the music, and had listened to the album through a couple of times. I remembered the song “Iridescent” and selected it and set it to repeat that song. And so I listened to that song over and over on my way home and back to the hospital (the lyrics and audio can be found below).

While I had no words for what was happening, or what I was thinking…and certainly couldn’t think of how to pray, Linkin Park did it for me that night. They gave me the words, the prayer, the utterances of the Spirit that I needed that night. Those words and that tune will forever be etched into my mind, connected to a time of deep despair and loss.

I don’t know that I’ve been able to “let it go” yet. I don’t know what “letting it go” looks like, when I’m still frustrated with and mad at God. And why would I want to trust a God who would put us in this situation in the first place? Why would I want to place my fears and frustrations before one who had the power to stop our loss, our life-changing trauma…but didn’t.

I don’t know the answers to those questions, but I’m thankful that I had these words that night. They still speak to me, and help me put words to the emotions that come upon me like unseen waves.

When you were standing in the wake of devastation
When you were waiting on the edge of the unknown
And with the cataclysm raining down
Your insides crying, “Save me now”
You were there, impossibly alone.

Do you feel cold and lost in desperation?
You build up hope, but failures all you’ve known.
Remember all the sadness and frustration
And let it go…let it go.

And in a burst of light that blinded every angel
As if the sky had blown the heavens into stars
You felt the gravity of tempered grace
Falling into empty space
With no one there to catch you in their arms.

Do you feel cold and lost in desperation?
You build up hope, but failures all you’ve known.
Remember all the sadness and frustration
And let it go, let it go.