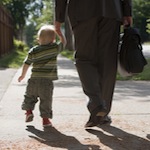 I worked from home last week so I could keep an eye on our 4 year old lab/pit bull Sadie. We found out the week before that she had a very small mast cell tumor, and so she had surgery to have it removed. So she had to take it very easy for the past week, and yes, she had to wear the cone of shame.

After sharing this news with friends on Facebook and Twitter, I found out that this was pretty common and lots of our friends’ dogs had gone through similar surgeries. But I still found myself getting really concerned and feeling pretty bummed out for Sadie. And I thought to myself, “Good lord. If I can feel like this for my dog…what’s it going to be like when something happens to one of my kids?”

My wife and I found out we were pregnant while vacationing in Hawaii this past July. This wasn’t a “crap – now THAT wasn’t what we were planning” kind of moment, but it definitely happened a bit quicker than we had expected. I remember thinking to myself, “Wow – in 9 months – I’m going to be a dad.”

And then we had our first ultrasound and the doctor was showing us the little blob that turn into our kid – and she said, “Oh – and there’s the other one.”

What?! Another one? That’s when the name for my blog, Dazed Dad, came to me – because it was clear that now in less than 9 months I was going to not only be a dad, but a dazed dad.

However, through our 18 weeks of pregnancy so far, I am realizing you don’t just become a dad instantaneously – it’s a process. I know that isn’t the most profound statement, but it’s not quite what I had expected. My wife had some early complications with her pregnancy that I blogged about pretty openly here. Since this is our first pregnancy, to say that it freaked us out is an understatement. And that’s when I began to experience some of those feelings of care and concern – and these were for my future kids who weren’t even born yet.

Taking care of Sadie, having to deal with some early complications and everything else that one has to deal with during pregnancy is simply preparation for one of the greatest jobs in the world – the chance to get to be a dad. I guess I always just assumed there was some switch that would get flipped as soon as my kids were born. But I don’t think it works that way as much. I think something will change the moment I see them, but I’m thankful for these months of preparation so that I can keep working on becoming a dad.