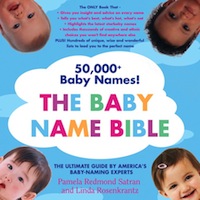 Naming babies is hard work! Now, it can also be fun. Especially when you come up with names like Wayne & Dwayne. While Cleaker 1 and Cleaker 2 are the official names of our lovely little twins (whatever sex they may be), Wayne & Dwayne is what I have taken to affectionately calling our future children. Don’t you just like the ring of it?

I think it’s great. Sarah on the other hand…not so much. But we do have fun coming up with potential names. I think my favorite moment so far was when I suggested “Gianna” as a name for a girl. I don’t know – it kind of had a nice ring to it. The first thing Sarah said was, “What? That’s a hooker’s name!”

One of the other things that I feel pretty strongly about is that whatever name we decide to go with – there has to be an open domain URL for that name. So, if we decide that Dwayne Walker Cleaveland is going to be the name, if www.dwaynewalkercleaveland.com is taken…we’re going to have to go back to the drawing board. Same with Twitter usernames and Facebook vanity usernames. These are important people…

Picking a baby name used to be so much easier. You liked Jane Smith? Great. Go with it. But there’s no way I’d want to name a girl Jane Smith these days, because you know she’d end up with something horrible like www.janesmith2010cuddlybear16.com for her domain name, and that’s not going to help her make the Varsity lacrosse team or get into an Ivy league university, is it?

Well – we’re going to have fun with it – and we’re going to pick wonderful names for these little Cleakers. But they’ll always be little Dwayne & Wayne to me.

**If you named your child Gianna – or know a Gianna who is a wonderful person – I hope this portion of the post doesn’t offend you. I still think it’s a pretty sounding name…just, not a name for the Cleakers as it turns out.**