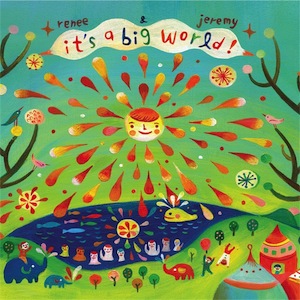 After listening to a few of them, I downloaded all 3 albums and have been really enjoying their stuff. The lyrics and music are really fun and it’s the kind of kid’s music that I also don’t mind listening to…which is a bonus for sure, considering the amount of times we’ll have to listen to certain songs when Caleb start picking out favorites. I especially have enjoyed  “It’s a Big World” and their “A Little Love” album, which includes covers of songs by Coldplay, REM and Red Hot Chili Peppers.

Sarah grew up listening to Raffi and so we’ve also been enjoying singing along with “Singable Songs for the very young.”

And one of my favorites growing up was Jim Valley (former member of Paul Revere & the Raiders). He would always come to our schools and local fairs to perform. I think I probably wore out my “Rainbow Planet” tape from listening to it so much.

I’ll leave you with a video clip of Renee & Jeremy (you can see more here). What was your favorite children’s music growing up? What do you enjoy listening to with your kids?