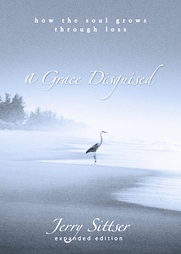 Another book I re-read recently was Jerry Sittser’s “A Grace Disguised: How the Soul Grows Through Loss.” Jerry is a religion professor at Whitworth College and was my professor, mentor and friend during my four years at Whitworth. While I haven’t stayed in touch with many Whitworth folk, Jerry is the one who I always try to see when I’m in Spokane and has been a good friend to me ever since graduating. For those who don’t know about this book, it details Jerry’s personal journey through grief when his youngest daughter, wife and mother were all killed in a car accident.

As I re-read it, obviously, it was much more meaningful to me than when I was a freshman in college sitting around in small groups in class trying to think that I had any idea at all what grief felt like. Granted, there were probably some freshman that had dealt with tragic loss in their lives by that point, but I hadn’t.

Something that Sarah and I have talked a lot about is about “integration” of loss and grief, rather than the idea of “moving on.” There are some books that address this issue, but I just wanted to share this quote from Jerry’s book:

“After three years, I continue to live in that tension. But there is a significant difference now. The sorrow I feel has not disappeared, but it has been integrated into my life as a painful part of a healthy whole. Initially, my loss was so overwhelming to me that it was the dominant emotion – sometimes the only emotion – I had…the sorrow I feel remains, but I have tried to create a landscape around the loss so that was once ugly is now an integral part of a larger, lovely whole.”

Obviously there are different phases of grief, and the immediacy of a loss will cause us to react certain ways. But I think the real journey and process of grief and loss is to figure out how to integrate it into our lives. I don’t know exactly what that looks like for us. I don’t know how exactly I am to integrate the loss of two twin boys into my life. But that is now part of my journey. I am a father. And my sons are dead. That is now part of my story, part of who I am. I cannot escape that.

My hope is that I too one day will be able to say that “the sorrow I feel has not disappeared, but it has been integrated into my life as a painful part of a healthy whole.”